ACCORD Junior Research Fellow analyses how past colonial structures contributed to current conflicts in the region.

Anthropological and socio-historical studies of the pre-colonial African Great Lakes region have testified to long periods of political stability as well as socio-economic development under various kingdoms and chiefdoms which comprised the region. Shockingly, however, most of the recorded history of the post-colonial African Great Lakes region depicts a scenario of elusive peace, punctuated by severe political turmoil as well as a socio-economic fabric torn apart by violence. Against this background, ACCORD recently hosted an Internal Staff Seminar to unpack the origins of conflicts in the region and present strategies for resolving these.

During the seminar held on 27 September 2013 at ACCORD’s Durban offices, ACCORD Junior Research Fellow David-Ngendo Tshimba gave a presentation titled ‘Anthropology of violence in the Great Lakes region of Africa: Engaging narratives for sustainable peace’. 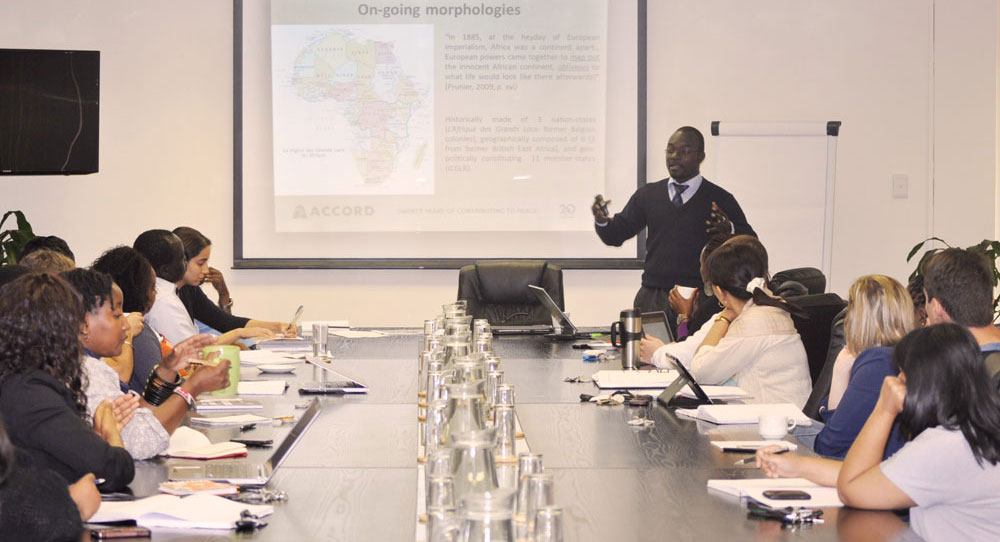 Tshimba’s presentation was based on the work being done by the African Centre for the Constructive Resolution of Disputes (ACCORD), in partnership with The Hague-based Global Partnership for the Prevention of Armed Conflict (GPPAC) and the Nairobi Peace Initiative-Africa (NPI-Africa), to contribute to efforts to resolve conflict in the Great Lakes region. This tripartite project, which was launched in January 2013, is being implemented in Burundi, the Democratic Republic of the Congo (DRC), Rwanda and Uganda. It aims to pursue avenues to consolidate and sustain a regional approach to peacebuilding in the Great Lakes region by placing emphasis on and encouraging local ownership in the implementation of activities in participating countries and communities.

Tshimba explained that the creation of nation-states, from what Gérard Prunier (2009) described as proto-nations, by colonial masters at the Berlin Conference (1884-5), without taking into consideration the fluidity of (ethnic) communities’ topographic and cultural boundaries, exacerbated tensions among the peoples and communities of the Great Lakes region. These tensions are still being felt today. He added that demographic and livelihood pressures from bordering communities in Burundi, Rwanda and Uganda vis-í -vis a deficiency of governance and security in the resource-rich DRC had contributed to worsening an already bad situation in the post-independence period, more so in the aftermath of the Cold War.

Tshimba’s presentation highlighted that half a century since countries of the Great Lakes acceded to their national sovereignty, the region still seems to be in recovery from its colonial ‘hangover’. In this respect, a key question still lingers: ‘Can communities hard-wired in social imagination characterised by antagonistic narratives of identity live together peacefully?’ This, Tshimba explained, is what the tripartite project aims to uncover and address in order to support the attainment of durable peace in the Great Lakes region.

During the discussion that followed the presentation, Junior Researcher Daniel Forti pointed out that the economics of war in the Great Lakes region, driven by extractive industries, cannot be overlooked, for they remain an important factor contributing to continued conflict in the region. In response, Tshimba was firm in his opinion that while economic interests do contribute to the protracted nature of conflict in eastern DRC, antagonism over group identity is still the major cause of clashes and the resultant human suffering, especially among unarmed civilian populations. Peacebuilding Coordinator Gustavo de Carvalho raised concerns that in light of the presentation, the effectiveness of local ownership of peacebuilding in contexts where the concept of locality is in question is itself problematic. Conceding this point, Tshimba concluded that the re-imagining of a new geopolitical Great Lakes region of Africa will still have to interrogate currently taken-for-granted questions, including ‘What is the meaning of a country (nation-state) in this part of Africa? Who ought to be a citizen? Whose leadership would be at stake as a result of this re-imagining?’

As part of the tripartite Great Lakes project, ACCORD continues to engage in and on peace efforts in the region. ACCORD’s internal staff seminars contribute to the institution’s research and knowledge-sharing work and aim to encourage members of staff to engage on current affairs and the multi-dimensional facets of African geopolitics. ACCORD works towards a peaceful Africa by supporting the development and implementation of effective conflict prevention, management and resolution activities, which necessitates a comprehensive understanding of African sub-regional policy theatres in order to promote sustainable peace and development across the continent.