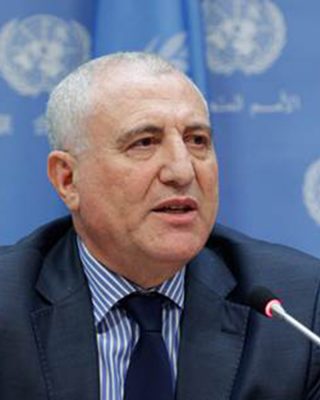 Ambassador Said Djinnit joined ACCORD in June 2019 as a Special Advisor based in Brussels, Belgium. He has served as the Special Envoy of the United Nations (UN) Secretary-General for the Great Lakes Region of Africa from September 2014 to March 2019, and as the Special Representative of the Secretary-General for West Africa from April 2008 to September 2014, where he was involved in conflict prevention and mediation efforts in various west African and Great Lakes region countries, including as the Facilitator of the inter-Guinean dialogue in 2013, which put an end to a political crisis between the Government and the Opposition which had serious incidents of violence.

Before joining the UN Ambassador Djinnit served as the first Commissioner for Peace and Security at the African Union (AU) from 2003 to 2008. He also served as the Assistant Secretary-General for Political Affairs of the Organisation of African Unity (OAU) from 1999 to 2003, and as Chef de Cabinet of the OAU Secretary General from 1989 to 1999. During his eighteen and a half year’s service with the OAU and then the AU, Ambassador Djinnit played a leading role in the transformation of the OAU to the AU and the development of the new African Peace and Security agenda and architecture. He has spearheaded efforts by the OAU General Secretariat and the AU Commission in supporting peace and mediation processes on the continent including in Ethiopia-Eritrea, the Democratic Republic of the Congo (DRC), Burundi, the Comoros, Madagascar, Côte d’Ivoire, Sudan and Somalia, among others. He also led the efforts on the deployment of the AU Peace Missions in Burundi (AMIB); Sudan (AMIS); and Somalia (AMISOM), and some mediation efforts including Comoros, Madagascar and the DRC.