H.E. Dr. Ernest Bai Koroma was democratically elected for two consecutive terms from 2007 – 2018 during which time he implemented far – reaching democratic reforms which resulted in the remarkable transformation of Sierra Leone.

Prior to becoming president, he served as Minority Leader in Parliament for the All Peoples Congress (party) from 2002 -2007 during which term he served in and chaired several Oversight Committees.

His legacy for the people of Sierra Leone covers the consolidation of peace, a massive rebuilding of roads, pipe borne water and energy infrastructure, which were severely destroyed during the 11 years of civil war. His reforms resulted in Sierra Leone becoming the fastest growing economy in Africa in 2014 before the deadly Ebola Epidemic and by 2018, the 3rd most peaceful in Africa.

On the international stage, he chaired the African Union Committee of Ten for the Reform of The United Nations which advocates for Africa to have 2 permanent seats on the UN Security Council and for more African representation at the United Nations. He also chaired the AU Peace Council for two consecutive years and participated in brokering peace in Cote D’Ivoire, Guinea Bissau and the Gambia.

In April 2018, President Koroma conducted peaceful democratic multi-tier elections and gracefully handed over power to the opposition which once again showcased his dedication towards democracy.

Since leaving Office in 2018, H.E has led three Election Observation Missions, to Namibia, Togo and Benin under the auspices of the African Union (AU) and the Economic Community of West African States (ECOWAS).

President Koroma is a founding member of the West African Elders Council whose objective is to prevent conflict through mediation and through the promotion of peace and democracy within the ECOWAS region. He is also a founding member of the Global Steering Committee “Campaign for Nature”, advocating for the protection of 30% of the planet through better environmental practices. As part of his advocacy for peace and sustainable development the former President is championing the establishment of an African Peace Engineering Corps.

Since leaving Office His Excellency has received many recognitions for his legacy in democracy and peace and has been referred to as the apostle of Peace.

Former President Koroma has been dedicating a good portion of his time in retirement on advocating for issues that are fundamental to peace, the environment, woman and youth empowerment. 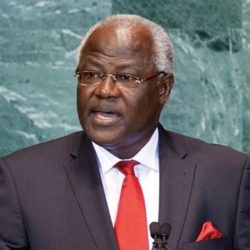 Another peaceful election in Africa