On 27 November 2019, the EU Delegations to Mozambique and South Africa, the African Centre for the Constructive Resolution of Disputes (ACCORD) and the EU Institute for Security Studies (EUISS) co-organised a seminar in Pretoria on ‘Addressing the threat of violent extremism in Southern Africa’. The event was financed by the Service of Foreign Policy Instruments (FPI) and also supported by the Finnish Presidency of the Council of the European Union, both having also contributed to this report.

The seminar was a first of its kind in Southern Africa, bringing together the diplomatic community, United Nations agencies, government officials, practitioners, policy makers and researchers to discuss the emergence of violent extremism in the region and the necessary measures to combat this phenomenon. Specifically, the seminar provided an opportunity to further understand the drivers and root causes of violent extremism in Southern Africa through a regional approach that takes into consideration context specificities, while also acknowledging transnational spill-over factors and linkages with organised crime and illicit trafficking. Discussions placed a special emphasis on Northern Mozambique, given the risk of the region becoming a hotspot for radical extremism in Southern Africa, and the impacts an escalation into a full-blown security crisis could have on political stability and social and economic development in the country and the entire region. The final panel explored conflict sensitive prevention and mitigation strategies, which could be a basis for EU’s engagement with governments and regional organisations, underpinning future EU assistance.

This report summarises the main takeaways of the conference and makes recommendations for follow-up actions, including supporting a regional dialogue within the Southern African Development Community (SADC) and the EU on how to tackle the growing threat of violent extremism in the region. 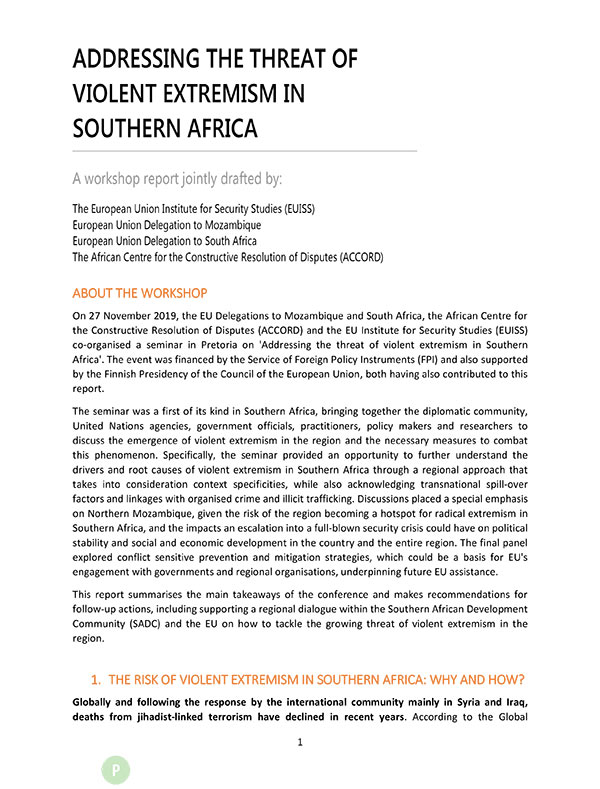