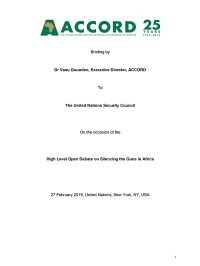 At the outset, let me take this opportunity to congratulate the Government of the Republic of Equatorial Guinea for attaining the high office of the Presidency of the United Nations Security Council for the first time in its 50-year history of independence. Mr President, I would also want to congratulate you and your Government for using this seat of power to focus on one of our major priorities in Africa; the prevention, management and resolution of violent conflict in all its manifestations.

Excellencies, our contribution here today comes after deep reflection of our 27 years of involvement in assisting to resolve conflicts in Africa and around the world. Over the last two and a half decades Africa has made huge progress in evolving a peace and security architecture, that started with a fledgling conflict management centre at the Organisation of African Unity (OAU) and which has today evolved into the African Peace and Security Architecture (APSA).

As ACCORD, we worked with the OAU from 1993, under the guidance of the then OAU Secretary General, Dr Salim Ahmed Salim, and we have consistently worked with, and have contributed to every incarnation of the conflict management mechanism through to its current form. All of us who were involved have learnt a lot, but unfortunately conflicts do not remain static. Consequently, we have been, and continue to be, on a steep learning curve. I shall point out shortly, Mr President, why your meeting today is so timely and why Africa’s time is fast running out.

Excellencies, over the last two decades many conflicts were resolved in Africa. Starting with my own country, South Africa, and its negotiated settlement which culminated in our first democratic elections in 1994, we have since seen a wave of conflicts resolved through negotiations e.g. Angola, Mozambique, Sudan/South-Sudan, Madagascar, Liberia, Sierra Leone, and recently Ethiopia/Eritrea and the Central African Republic. These were all seemingly intractable conflicts.

Excellencies, there is no doubt that huge progress in the field of peace and security has been made over the last quarter of a century in Africa, both in creating institutions and in developing knowledge, skills, and expertise to resolve conflicts. Our own institution, a specialised conflict management institution, has trained over 20 000 people in Africa, many who now occupy high office as Presidents, Ministers, senior Government officials, military generals and civil society leaders. We have just been ranked by Pennsylvania University’s annual think tank rankings as one of the top 100 thinks tanks in the world, and number one in Africa. We are still learning, Excellencies, but we don’t lack structures, skills, and expertise in Africa.

If this is the case of success in Africa then you may legitimately ask why we still see the persistence of conflict in parts of Somalia and the Democratic Republic of the Congo (DRC), the emergence of a South-Sudan and Libyan civil war, an increasingly ungoverned Sahel region, and violent street protests across many relatively stable countries in Africa.

In this context, of emerging new conflicts, the question then arises as to whether we can effectively Silence the Guns by 2020? The answer is a resounding NO. Was the aspiration and vision correct? The answer must be a resounding YES. On explaining this deadline of 2020 Mr Lamamra, during the October 2018 High Level Workshop on Silencing the Guns, made the point that, “in deciding the deadline there was a need to balance seriousness and realism”. However, Excellencies, today it is not important to debate the deadline but more important to debate the modalities for silencing the guns.

Excellencies, this debate on the 27 February 2019, a year before the 75 Anniversary of the founding of the United Nations, can only be meaningful if it recognises that an initiative like Silencing the Guns is merely a mitigation tool that, in the absence of good governance and the urgent transformation of the structural drivers of conflicts, will be meaningless.

Excellencies, many parts of Africa are reaching a dangerous tipping point and we are currently in a race against time. Transformation to deal with the root causes and the deep structural challenges will take between twenty to forty years to address. In the meanwhile protracted conflict, ranging from violent street protest to civil war, and from radicalised terror insurgencies to criminal insurgencies, will characterise large parts of the Continent. Robust mitigation, including silencing the guns, has to be an immediate priority if we are to arrest the violence and conflict and allow socio-economic transformation to take place. Anything short of that will result in the gradual collapse of law and order and a deterioration into civil war that will push Africa’s transformation even further back.

The deep structural challenges I speak of are not new. We are all aware that the vast majority of countries in Africa have not sufficiently dealt with poverty, unemployment and inequality. The main reason is that skills development and employment creation have not been successful because there has not been a fundamental transformation in the structure of Africa’s economies for decades. Most African countries remain largely subsistence agricultural economies that have made little to no progress in moving towards an industrial or services economy. This is occurring amidst an exponentially growing population that is rapidly urbanising into unplanned cities that offer no prospect of proper housing, health care, education, sanitation, water, etc.

This Excellencies is the main challenge in Africa today. Introduce guns into this equation and you light the proverbial “time bomb” that is waiting to explode! That is why we must silence the guns today… that is why we said by 2020! The challenge of terrorism, criminal syndicates, and separatist movements will continue to challenge our collective expertise as some of our governments fail to exercise sovereign control over their entire territories.

However, most Governments will be even more challenged in urban areas, where they generally exercise sovereign control, but are failing to deliver the essential social goods because of a failure to transform their economies, because of poor or non- existent leadership and governance, because of corruption, and because they are sometimes just overwhelmed with the challenges. Our prognosis five years ago was that the theatre of conflict will shift to urban areas over the next two decades. Urban conflicts that are badly managed will result in higher levels of civilian casualties, turn Governments who lose control over law and order to become more authoritarian, and this cycle will have a negative effect on development, creating a new wave of internally displaced people and political refugees.

This Excellencies is no longer a prognosis… it is today’s reality! This reality is not just Africa’s responsibility to deal with, it is also a global responsibility.

I know you will pass a resolution today but what will you do beyond that? Will you summon the political will of your member States to stem the flow of illicit weapons, almost all of which are not produced in Africa? Will you provide more resources for conflict prevention and peacebuilding… to contribute to building local and national capacities for conflict prevention and management so that women, young people, Government leaders, religious leaders, business people and others can all be trained to manage conflicts at their source, and prevent the escalation of these conflicts and consequently silence the guns?

Will you ensure that your member States encourage their private sector to turn Africa’s extractive industries into Africa’s productive industries, ensuring that competitive beneficiation benefits local employment and eliminates poverty and inequality, consequently dealing with the deep structural drivers of Africa’s conflicts? Will you take measures to ensure that the people of the DRC, who will once again contribute their muscle and their minerals to power another industrial revolution… the 4th Industrial Revolution, will also this time benefit their minds and their mouths? Because Excellencies, unless you take these actions collectively, so that each of you representing your countries here today exercise your national interest through the global responsibility this august room demands… you would not have silenced the guns… you would only have silenced your powerful voices.