In line with Article 20 of the Protocol Relating to the Establishment of the Peace and Security Council (PSC) of the African Union (AU) the PSC has taken steps to “…encourage non-governmental organizations to participate actively in the efforts aimed at promoting peace, security and stability in Africa”. It is against this backdrop that the 50th Anniversary Solemn Declaration, the Tripoli Declaration, the Tripoli Plan of Action, the Maseru Conclusions and the Livingstone Formula are instructive.

The African Union Commission (AUC) at a consultative meeting of civil society organisations (CSOs) and research institutes held in Addis Ababa, Ethiopia on 16 April 2014 designated ACCORD, ISS, OXFAM and WANEP to organise regional consultations of non-state actors as a platform for developing concrete recommendations on how to enhance the relationship between stakeholders and the AU in the promotion of peace and security on the continent in the next decade.

In view of interactions with the PSC and the African Peace and Security Architecture (APSA) over the past 10 years, the regional consultations provided an avenue for non-state actors to share their perceptions and perspectives of the PSC and AU in an all-inclusive process. It was specifically to give a voice to non-state AU stakeholders, create awareness and understanding of the work of the PSC/APSA and enable CSOs to contribute to and review the mechanisms and normative frameworks of the Commission.

The key objectives of these consultations were 1) to assess the PSC in its first 10 years of operation, and 2) to establish how the relationship between the PSC and non-state actors can be enhanced in order to promote peace, security and stability in Africa. 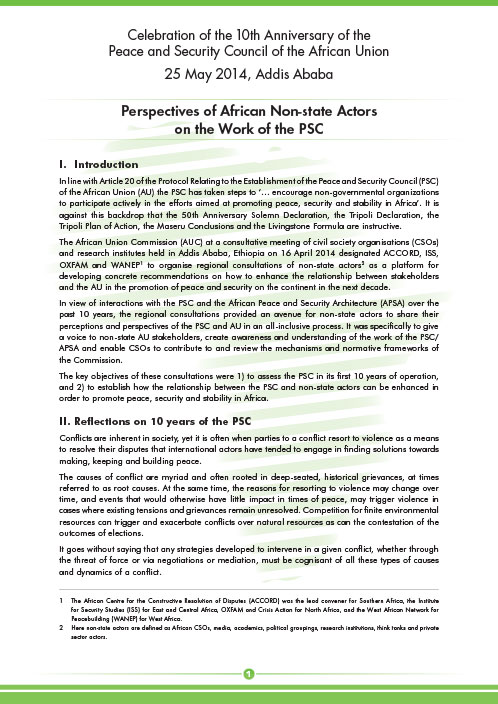