The Work of the International Conference of the Great Lakes Region 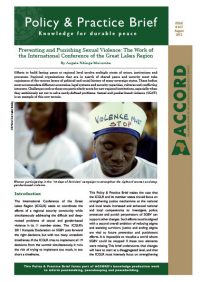 Efforts to build lasting peace at regional level involve multiple strata of actors, institutions and processes. Regional organisations that are in search of shared peace and security must take cognisance of the various layers of political and social history of many sovereign states. These bodies must accommodate different economies, legal systems and security capacities, cultures and conflicting interests. Challenges such as these are particularly acute for new regional institutions, especially when they ambitiously set out to solve newly-defined problems. Sexual and gender-based violence (SGBV) is an example of this new terrain.

The International Conference of the Great Lakes Region (ICGLR) seeks to coordinate the efforts of a regional security community while simultaneously addressing the difficult and deep-rooted problems of sexual and gender-based violence in its 11 member states. The ICGLR’s 2011 Kampala Declaration on SGBV puts forward the right decisions, but with too many unrealistic timeframes. If the ICGLR tries to implement all 19 decisions from the summit simultaneously, it runs the risk of trying to implement too much, in too short a timeframe.

This Policy & Practice Brief makes the case that the ICGLR and its member states should focus on strengthening justice mechanisms at the national and local levels. Increased and enhanced national and local competencies to investigate, police, prosecute and punish perpetrators of SGBV can support other changes.â€„Such efforts must be aligned with a second overall ambition of reducing stigma and assisting survivors. Justice and ending stigma are vital to future prevention and punishment efforts. It is impossible to visualise a world where SGBV could be stopped if these two elements were missing. This brief underscores that changes will have to start at a disaggregated level, and that the ICGLR must intensely focus on strengthening the independent competencies of member states so that they can gain interdependent capabilities. The challenge of SGBV presents an opportunity to develop regional values that could turn the Great Lakes region into a realm without rape and other forms of sexual violence.

SGBV and challenges for a new regional security community

Karl Deutsch’s 1968 presentation of regional organisations is still relevant today. His study of political integration drew conclusions on “four main tasks of integration: 1) maintaining peace; 2) attaining greater multipurpose capabilities; 3) accomplishing some specific task; and 4) gaining a new self-image and role identity”.4 The problem of SGBV in the Great Lakes region offers an important test. Solving this problem is certainly different from addressing a ‘hard’ security threat, but it is a task which merits serious attention for its human security value and as an important opportunity for the region to acquire a new self-image.

A very young regional actor, the ICGLR emerged in the late 1990s out of the great war in the Democratic Republic of the Congo (DRC). The war involved or affected most of the states in the Great Lakes region. The DRC continues to grapple with major deficits in its capacity to maintain security within its borders and protect civilians from armed violence.â€„The conference, originally established to forge a common security platform for the region, has developed into a formal institutional structure, with meetings held at the heads of state and government level every two years; a forum for regional ministers who take executive decisions; national coordinators and national-level coordination mechanisms; and an executive secretariat headquartered in Burundi. These elementsâ€„are meant to support the effective implementation of the decisions from the ICGLR summit, but most importantly to follow-up and advance the 2006 ICGLR Pact on Security, Stability and Development in the Great Lakes Region.

In December 2011, at its fourth ordinary summit held in Kampala, Uganda, the ICGLR held a special session on sexual and gender-based violence.

The special session on sexual and gender-based violence resulted in the adoption of the Declaration of the Heads of State and Government of the Member States of the International Conference on the Great Lakes Region at the Fourth Ordinary Summit and Special Session on Sexual and Gender Based Violence (SGBV) (Kampala Declaration of the ICGLR on SGBV). The declaration affirms the ICGLR’s pre-existing political commitments made under the Pact on Security,â€„Stability and Development in the Great Lakes Region (2006) and the Protocol on Prevention and Suppression of Sexual Violence Against Women and Children (2006).

Out of these, the ICGLR Executive Secretariat has decided to focus on eight decisions that outline clear deadlines and which involve implementation at regional level, where the “ICGLR Secretariat has control”.6 The decisions call for significant and wide-ranging judicial and legislative changes, advocacy and awareness, and institution-building:

These decisions do in fact involve national actors and will take considerable resources to implement in these short, or even longer, timeframes. Realistically, coordination between the regional and national level as well as re-adjusting these timeframes will be integral to the successful implementation of these decisions. Moreover, the secretariat in Bujumbura will have to implement other Kampala decisions at the same time.

Launching a major advocacy campaign, drafting new or revised legislation, domesticating that legislation, appointing gender officers, establishing a recovery centre or centres, building and equipping a training facility and other activities are long-term projects, rather than short-term outputs. They require meaningful investment from countries in the Great Lakes, including sustainable financial resources, awareness-raising and advocacy within each country, and significant and unified political will and support.

Objectives which do not seem feasible can frustrate the most well-meaning bureaucrats, and with frustration, the ICGLR will face hazardous increases in the risks of non-implementation. Finally, if these decisions are not implemented, the region will lose valuable opportunities: no implementation means no shared common values, mutual responsiveness and perceived joint rewards. Thus implementing the ICGLR’s SGBV framework is not just a matter of solving the problem but is also a means to the creation and maintenance of a stronger Great Lakes security community.

The Great Lakes framework for SGBV can be interpreted as an opportunity or a challenge to upgrade the region from one where SGBV is chronic and unmitigated to one that provides equal security for all of its citizens. It is hoped that the governments of the region, because of their own limits and constraints within the international system, would prefer to see their capacity to punish and prevent sexual and gender-based violence increased, rather than stymied. If so, finding a sustainable and realistic way to achieve the provisions of the Kampala Declaration is crucial to advancing ICGLR member states’ independent competencies and interdependent capabilities.

Sexual and gender-based violence is varied – as diverse in terms of victim, perpetrator, timing and location as any other form of violence. Commentary on sexual violence has often been confined to definitions encompassing domestic violence or war-time rape. Sexual violence is perpetrated by state security officers in prisons and detention centres, by family members against children, is inflicted on servants, forms part of recruitment strategies in armed conflicts and is used to harass on the street, in the fields, in offices or classrooms.7 This variation makes this form of violence difficult to prevent and punish because entire societies must be mobilised. The ICGLR and other international actors address sexual violence as it is defined by the International Criminal Court (ICC) as rape, sexual slavery, enforced prostitution, forced pregnancy and enforced sterilisation.8 Conflict-related sexual violence is sexual violence which takes place in the context of, or is associated with, armed conflict. In war and peace gender-based and sexual violence have had “significant and long lasting negative consequences for girl’s and women’s physical, sexual and mental health, as well as negative implications for economic development and social progress in member countries and across the Great Lakes region”.9

Given this variation, and the resource constraints of the ICGLR, what should the regional institution do to achieve the provisions of the Kampala Declaration? How can it prioritise its course of action? First, a central worry is time. Notwithstanding future activities and initiatives, the current timeframes are too brief, and a longer-term workplan should be authorised by the governments of the region. Secondly, out of the eight decisions chosen by the Executive Secretariat, five deal directly and in an inter-related manner with justice and with ending stigma, highlighting the importance of national competencies in investigating, policing, prosecuting and punishing SGBV, as well as in providing citizens with a stigma-free and enabling environment to sue for justice.

Legal, security, judicial and punitive practices are critical to stopping sexual and gender-based violence. In many Great Lakes contexts, these practices are under-developed. As part of a project to understand former combatants’ attitudes to sexual violence and impunity, focus group discussions were held in Burundi in 2011.10 A total of 26 individuals (eight female and 18 male) participated in the focus groups. The groups met in the capital city, Bujumbura. Meetings were arranged through purposive snowball sampling techniques. Fieldwork included interviews with individuals and representatives of civil society organisations in Bujumbura. While the project is still in progress, early results indicate that the quality of justice for survivors of sexual violence was the most pressing concern for citizens of this post-conflict state. Although the government’s recent legal reforms were widely known, these former fighters were convinced that perpetrators of SGBV could remain free. Furthermore, despite the positive response to new and increased efforts by the Burundian state and civil society to combat SGBV, corruption within the security sector and judiciary was identified by participants as the reason for continued impunity:

If a perpetrator is caught, they bring him to jail, but if he has money, corruption helps in his release. It is the rapist who corrupts judges and police; you keep yourself waiting and can be infected with disease resulting from sexual violence and the hospital fees are not paid. The perpetrator is released and your process is over without indemnity. It happens a lot. It happens so much that you have to plan how to deal with it.11

Overwhelmingly, the problem of justice recurred as a concern during the discussions. In interviews with representatives of civil society organisations it was found that survivors do not have access to medical care, that forensic facilities are almost non-existent, and that the country’s justice system is perceived as embryonic when it comes to prosecuting cases of SGBV.12â€„Indeed, the ICGLR’s own background documents confirm that this is a problem throughout the Great Lakes region, citing weak legal and policy frameworks as secondary causes of SGBV and norms that justify violence against women, weak community sanctions and high levels of crime as primary causes of the phenomenon.

Based on the above, the case can be made that three areas could be prioritised to produce observable outcomes for member states while preventing and punishing sexual and gender-based violence:

A focus on building the justice delivery capacity of ICGLR member states, while simultaneously empowering citizens, will go a long way towards preventing and punishing sexual and gender-based violence in the Great Lakes region.