Role of civil society in the APRM revitalization agenda

Remarks by Hon. Mwangi Kiunjuri during the civil society conference

Organizers of this workshop South African Institute of International Affairs (SAIIA) and the Electoral Institute for Sustainable Democracy in Africa (EISA), participants Ladies and gentleman

I am delighted this morning to join you and participate in this crucial conversation regarding the revitalization of the APRM.

You would recall that our President, H.E Uhuru Kenyatta was unanimously elected by his peers to the position of the Chairperson of the APR Forum of Heads of State and Government participating in the APRM in June 2015 during the Summit held in Johannesburg, South Africa. While making address at that Summit, President Uhuru Kenyatta expressed concern over what he saw as a lackluster performance of the APRM and its then almost rudderless slide into oblivion of Africa’s governance conversations and debates. He was concerned about, among other things, the protracted search for a substantive CEO for the Continental Secretariat, the dire financial position, the waning interest from strategic partners and the general decline in enthusiasm around the Mechanism and its ability to transform leadership across the Continent. His Peers endorsed the call for urgent measures to be taken to ensure the revitalization of the mechanism and make it more effective.

Under the circumstances, he offered to host an extra-ordinary summit here in Nairobi in an attempt to kick-start the revitalization process. This was preceded by a couple of technical planning meetings that yielded very useful suggestions on how the Mechanism could be revitalized.

Unfortunately, the Extra-Ordinary Summit was postponed at the 11th hour due to unavoidable circumstances. Obviously this left many people disappointed including the civil society organizations that had clearly looked forward to the event in the hope that it would help revive the Mechanism and make it more effective as a tool for fostering inclusive conversations and promoting good governance.

However, in spite of the setback, APRM Kenya continued to work behind the scenes to encourage stakeholders to keep their eyes trained on the prize – the revitalization of the APRM. Ordinarily, it would have been easier to hide away from the mounting criticisms at the time over the rescheduled Summit, but we thought it was going to be more meaningful to engage with those who got in touch with us, apologize and give the assurance that the issue of the revitalization of the APRM remained a key priority for the APR Forum Chairperson who actually agonized much before reluctantly directing that the Extra-Ordinary Summit be rescheduled.

After that, attempts were made to hold the meeting before end of 2015 but it became entirely impossible to gather the Heads state and Government ahead of the January 2016 Summit which was turned into a special event as it focused on a single agenda – the revitalization of the APRM.

So, yes, the postponement of the Extra-Ordinary Summit was quite worrying but am here today to underscore our commitment to the revitalization agenda and demonstrate that we are indeed very serious about it.

We still do apologize for the anti-climax that it caused all round. But we have since been able to secure a stable leadership for the Continental Secretariat under our new CEO, Dr. Eddie Maloka who has hit the ground running.

The APR Forum discussed six priority areas regarding the revitalization of the APRM and tasked a select Committee of Focal Points and Strategic Partners to consolidate the proposals, prepare an implementation plan and submit the same during the next summit for consideration and adoption. That Committee met here in Nairobi on the 9th and 10th of May and we are now more or less ready for the Summit, having executed the task given to us.

As you would appreciate, I cannot delve into the details of what is going to be presented at the Summit but at least I can outline the key issues that will be up for consideration:

In closing, I wish to concede that we have not done terribly well in consulting with the Civil Society Organizations as we deliberated on this important agenda. With the benefit of hindsight, we should have outlined the issues and sought your input. But all is not lost because I believe we can still work together in ensuring the success of the revitalization agenda. Going forward, I think we should seek to create opportunities for mutual, constructive engagements in order to enrich the governance discourse in our continent.

I wish to reiterate that APRM needs you and beyond participation in the country review processes, you retain the role of reminding state parties of their obligations, where they are failing, even commending them where they do well and most importantly, offering viable alternatives where need be. The office of the Chairperson of the Forum and that of the Chairperson of the Committee of Focal Points are certainly ready to listen, to engage and accommodate. 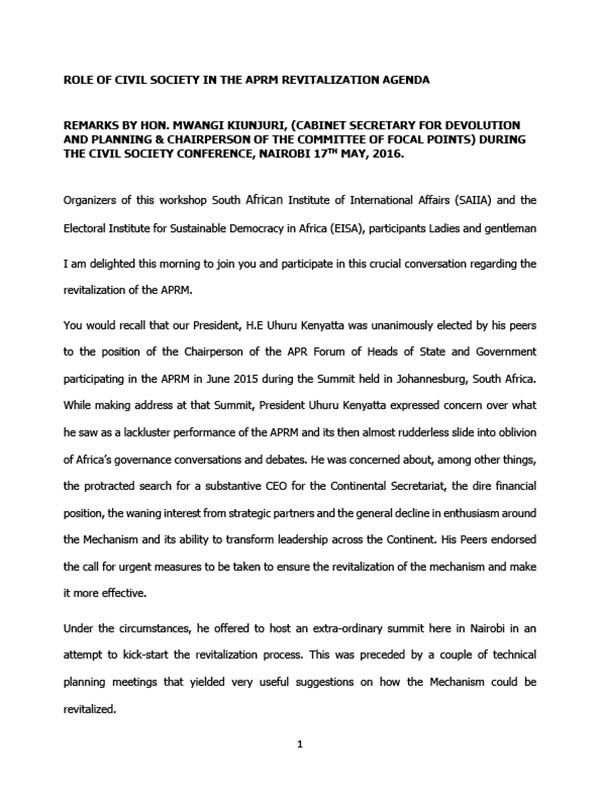