At this stage I would like to give you glimpses of the scope and direction of the discussions we have had over the past 2 days.

The full points covered as well as the recommendations thereof will be detailed in our final report in due course.

Let me just recap by reminding you that this has been a meeting of the ‘Pan-African Network of The Wise”, which aims to include institutions, mechanisms and actors working in the field of conflict prevention, mediation and conflict transformation. We have had views from different parts of the continent, as well as from individuals of various levels of experience and authority: representatives from the African Union, Regional Economic Communities (RECs), religious leaders, representatives from national judiciary institutions, researchers, academics, youth, women and institutional partners.

Successive speakers have made it clear that the discussions have been in the context of the promotion of culture of peace in Africa to address the difficult and hydra-headed challenges we continue to face.

It has been particularly underlined that we are here because of one cardinal reason, namely, the continent continues to face problems and it behooves us, as Pan-Wise, to discuss them and assist decision-makers to address them for the benefit of our continent. Our challenges intertwine with issues, which whether they are crosscutting or stand-alone, relate to the following:

These constitute emerging and future threats to peace and security on our continent.

This is why the PanWise is interested to help develop mechanisms that can research the root causes of these threats to peace and security on our continent, and move expeditiously towards rapid intervention.

Let me stress that what is peculiar about this meeting is the enhancement of quality of the discussions through the invitation and participation of people who are on the front line, directly involved in the efforts at various local, national, continental and international levels in the effort to prevent manage and resolve conflict and silence the guns by 2020.

We noted that the efforts to create a culture of peace should be a holistic and concerted undertaking putting together actors at all levels, but relaying on the efforts of local and national as incoming members of PanWise.

The trajectory logically took us through the issues of the causes of armed conflicts in the continent. In that regard the discussions, in seeking ways of addressing such threats decided to underline the necessity to explore the limits of harmonization and coordination on conflict prevention and mediation by Africa’s regional and sub-regional organizations.

For that reason we looked at how to strengthen the collaboration between Africa’s regional and sub-regional organizations in mediation and preventive diplomacy. Speakers drew illustrations from the experiences and challenges in dealing with situations such as the Central African Republic, the Republic of South Sudan, Libya, the Democratic Republic of the Congo, Tanzania, Uganda, Cote d’Ivoire and Mali as well as successfully resolved issues from Kenya and elsewhere.

In that regard, the discussions have noted the importance of the timely use of good offices of the AU and RECs especially in our engagements with member states and existing national peace infrastructure and strengthening the role of national and local actors in conflict prevention, dialogue, conciliation and mediation for the highest impact, so that other mediators can do the rest.

We equally emphasized the role played by international bilateral and multilateral cooperation and partnership including those of partners in general and the United Nations (UN) in particular, in view of its unique role as the organization with the primary responsibility for the maintenance of international peace and security.

It is equally significant to note that we have stressed, in the course of our discussions, the importance of understanding the relevance of institutions and mechanisms for coordination and cooperation.

It would follow from the above overview that the institutionalization of a culture of peace will thrive only with a collective effort on the part of local, national, regional and continental and international level, undertaking diverse activities in coordinated and collaborative manner.

It is against this background that we decided to point to a way forward which presents not only the issues, the actors, and the activities but also the fundamental threats to peace and security and economic development and stability which need to be addressed including poor governance, the proliferation of arms, various forms of trafficking and the lack of social infrastructure.

I am glad that the recommendations that were proposed include the strengthening of the capacity of hitherto marginalized groups such as women and the youth for mediation and in other structural efforts aimed at mediation.

Also important is the fact that we have underlined the importance of the implementation of Agreements that result from mediation efforts; the necessity of drawing from traditional African knowledge for preventing, managing and resolving conflict.

There is also the issue of strengthening structures and institutions at the local, national, regional, continental, bilateral and international stakeholders.

Finally let me indicate that the discussion here is not exhaustive and closed.

Let me thank you all for this immense contribution and the commitment with which you have supported this effort to strengthen mediation in Africa towards conflict prevention and post-conflict reconstruction and development in our continent.

You may, therefore, send your contribution to the AU Panel of the PanWise Secretariat by mail. 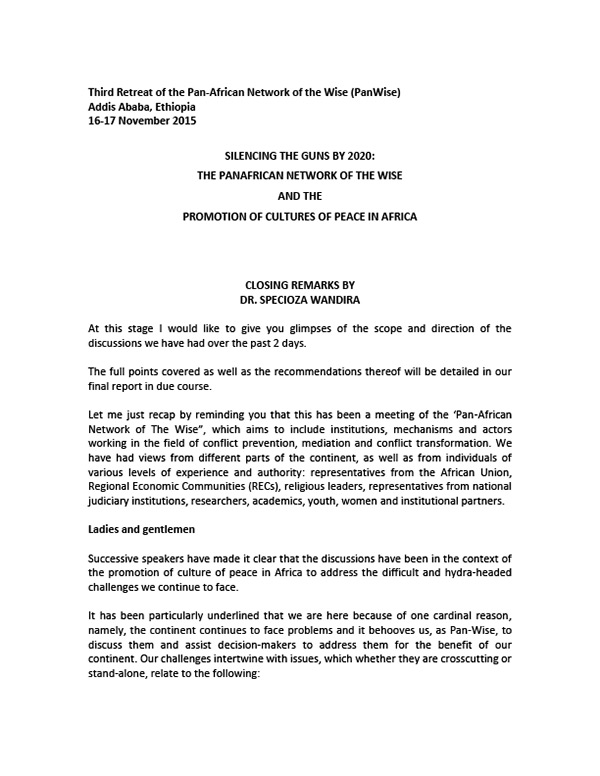