JAOs receive specialised training in jurisprudence for the sake of sustainable peace in post-conflict environments.

The consolidation of peace may not be sustainable in a post-conflict country if the rule of law is not implemented. Supporting the transformation of a justice system in a post-conflict environment is a challenging task requiring unique skills, cultural sensitivity and specialised expertise. As a result, a comprehensive training programme on the rule of law for judicial affairs officers (JAOs) was developed to enhance their substantive knowledge and performance and to encourage greater uniformity and coherence in approaches to strengthening judicial and legal systems throughout peacekeeping operations.

The rule of law is a principle of governance in which all persons, institutions and entities, public and private, including the State itself, are accountable to laws that are publicly promulgated, equally enforced and independently adjudicated, and which are consistent with international human rights norms and standards.

In its capacity as a Civil Society Organisation (CSO), ACCORD/TfP attended the Rule of Law Training for JAOs in United Nations Peacekeeping Operations from 25-31 October in Musanze, Rwanda. The training course was organised by the Criminal Law and Judicial Advisory Service (CLJAS) in the Office of Rule of Law and Security Institutions (OROLSI), the Department of Peacekeeping Operations (DPKO), in collaboration with the German Centre for International Peace Operations (ZIF) and Rwanda Peace Academy (RPA).

The training brought together 20 national and international JAOs in DPKO-led and DPA-led missions. In addition, representatives of DPA, OHCHR, UNDP, UNICEF, UNODC, and UN Women, as well as professionals working in capacities relevant to the strengthening of the rule of law, participated in the training. Experts from other organisations including representatives from the European Union (EU), the Organization for Security and Cooperation in Europe (OSCE), the Southern African Development Community (SADC), CSOs, think tanks and representatives of Rwandan authorities also attended. ACCORD/TfP was represented by Mr Fabrice Kitenge Tunda – Programme Officer, Peacekeeping Unit. 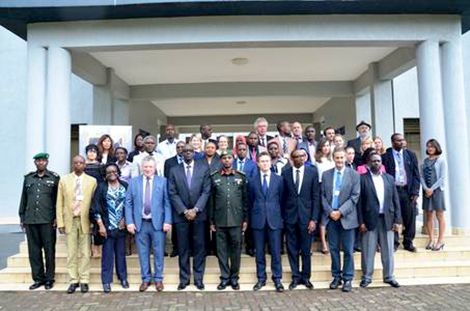 The course also highlighted the elements and mechanisms of transitional justice strategy, justice for women and children, coordination between stakeholders, promotion of human rights, imposition of sanctions on political leaders or criminals, an understanding of political and legal contexts in host countries.

The aim of the training was to build the capacity of participants with regards to assisting host countries to strengthen their legal and judicial systems.