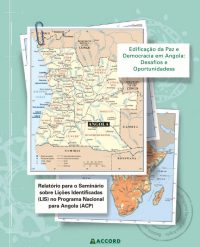 The Angola Country Program Lessons Identified Seminar (LIS) took place in Luanda, Angola, on 01 and 02 October 2008. The overall goal of the seminar was to create a forum for sharing of experiences, analysis, and reflections by various stakeholders working in different sectors of peacebuilding in Angola. The seminar also aimed to evaluate peacebuilding and reconciliation processes that have been implemented in Angola since the end of the civil war in 2002.

The seminar was attended by 34 participants from seven Provinces of Angola (Luanda, Kwanza Sul, Huambo, Bié, Huí­la, Cunene and Luanda Sul) and abroad, and ACCORD staff members. The seminar provided a forum of discussion and analysis to a diversity of stakeholders working in the field of peacebuilding in Angola. The richness of the discussions ranged from the variety of themes presented to the broad representation of national and grass-roots institutions.

The seminar was a final activity in the current (2006-2008) phase of ACCORD’s Angola Country Program (ACP). The ACP, which was initiated in 2006, implemented a series of activities such as assessment visits, dialogue sessions, Training of Trainers (ToT) workshop and capacity building workshops in conflict management. The Program also held a seminar on the development of a Monitoring and Evaluation (M&E) tool for peace-building activities and has developed training materials in the Portuguese language for use in Angola. By October 2008 when the LIS was held, the Program had engaged about 300 Angolans in all of its activities and networked with various civil society organisations and government structures in most of the provinces of Angola.

The overall assessment based on the analysis and debates that unfolded during the two-day seminar in Luanda provide useful information about the current state of affairs in terms of peacebuilding in Angola as well as direction for future action plans. One of the conclusions from the seminar was that Angola is in transition from conflict, and that there are institutional actors that are playing an important role in the different peacebuilding tasks. However, the challenges for a deep transformation of Angolan society are still quite formidable. The priority areas for the next five years therefore centre around three Bs: better mechanisms of dialogue and coordination of activities between the various stakeholders in the field; better and systematic evaluation of the various programs and projects on the ground; and better commitment for understanding the complexities of the Angolan transition without ignoring the examples and lessons from other post-conflict transitions in Africa. Judging by the continuous mentioning, during the discussion in the seminar, of examples of other African transitions, this latter aspect is extremely important to the current actors in Angola. Indeed, comparative approaches to peacebuilding will be important for the Angolan actors in order to avoid the same mistakes and cycles of post-conflict injustice that have been registered in other post-conflict transitions in Africa.

This report ends with some recommendations that could be the basis for a renewed commitment to Angola. These recommendations were conceptualised in order to develop further programs for the next few years in Angola.