The question of youth participation in peacebuilding processes in Jos, Plateau State, Nigeria

The available body of literature addressing the roles of young people in armed conflict provides evidence of extensive child and youth involvement in warfare. For instance, Ukiwo (2003) draws attention to the role of young people as key actors in the escalation of violent conflicts in Nigeria’s Plateau State city of Jos, while other scholars emphasise the notorious use of violence by youths during Europe’s political crises and conflicts of the 1930s.

Contrary to the dominant perception of youths as inherently violent, this paper posits that young people are not intrinsically inclined to violent behaviour; rather, they are products of their societies. It is argued, therefore, that the incorporation of young people in peacebuilding processes is bound to facilitate the realisation of sustainable peace in society, by redirecting the energies of young people to the implementation of constructive peace projects. This paper takes the position that the incorporation and utilisation of youths in peacebuilding processes would facilitate their transformation from agents of violent conflict, to agents of peace in their societies. 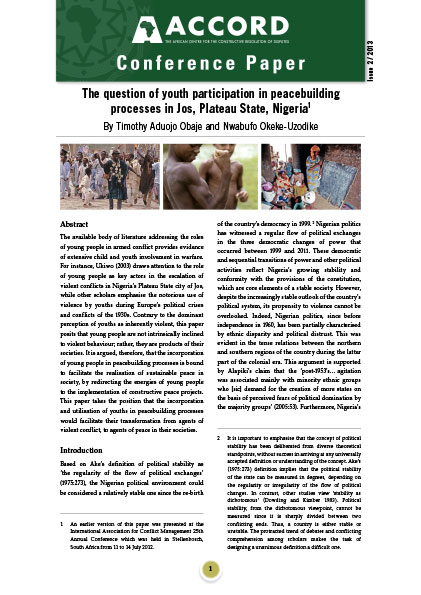