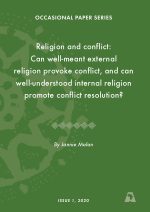 Since the brutal injustice of apartheid in the old South Africa was caused and exacerbated by misunderstandings in a group adhering to a particular version of Christianity, explanatory examples are mostly taken from the context of Christianity in South Africa. Examples of religious and political leaders who opposed apartheid are also given from the same context. However, reference is made to other scripture-based religions, and to religion in general, since important lessons – both forewarning and inspiring – may be derived from the Christian context. The paper appreciates the good intentions of people who promote their own religion as traditionally observed. However, it strongly emphasises the inner meaning and transformation that may be regarded as the core of Christianity, and probably also of all other forms of religion. Its main recommendation is that religiously committed human beings should focus on the inner aspects of their religion, and therefore also play a meaningful role in addressing root causes of conflict and in promoting the structural and attitudinal changes needed to transform a conflict situation into one of peaceful coexistence.