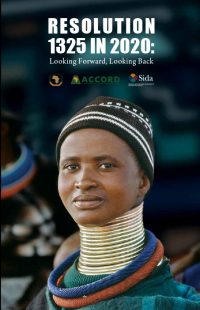 Women play multiple roles in conflict and post-conflict situations, and these roles extend well beyond those of caregivers and victims. As such, it becomes crucially important to promote women’s agency and build on their potential in peace processes by including them in all levels of participation – including in peacekeeping; negotiations; mediation; socio-economic reconstruction; disarmament, demobilisation and reintegration (DDR) and security sector reform (SSR) processes…

Such thinking has informed the crafting of various international instruments that seek to give voice to women globally, and one such normative instrument is United Nations (UN) Security Council Resolution 1325, which was passed on 31 October 2000 by the UN Security Council. Resolution 1325 (UNSCR 1325) recognises the links between women, peace and security by highlighting the agency of women and mandating governments to ensure their inclusion in all processes affecting their peace and security. Ultimately, the resolution provides an overarching, comprehensive and wide-reaching policy framework for addressing the complexities and gaps surrounding women, conflict, peace and security. While the resolution recognises that women are disproportionately affected by violence during conflict, it also further underscores women’s roles in conflict prevention and ultimately calls for women’s participation at all levels of peace processes including peacekeeping, negotiations and peacebuilding.

A decade has passed since UNSCR 1325 was unanimously adopted, yet women are still not participating equally in peace and security initiatives. The 10-year anniversary of UNSCR 1325 spurned varied commemorations globally. Following the African Union’s (AU) declaration of 2010 as the Year of Peace and Security, the 2010 Make Peace Happen Campaign, the declaration by the AU of 2010-2020 as the Decade of the African Women, and the 10th anniversary of UNSCR 1325, the African Centre for the Constructive Resolution of Disputes (ACCORD), in partnership with the AU Peace and Security Council, hosted an international High-level Seminar with the theme, ‘1325 in 2020: looking forward… looking back’. Held in Durban, South Africa on 8 and 9 October 2010, the High-level Seminar drew close to 60 participants from civil society, governments, intergovernmental organisations, scholars and practitioners from different countries, who were united by their quest for women’s involvement in the realm of peace, security and development.

The High-level Seminar, chaired by Graça Machel, the chairperson of ACCORD’s Board of Trustees, enabled delegates to deliberate on an Africa-wide strategy on women, peace and security while realising the importance of good practices and lessons learned. Focusing on global examples, but with particular attention to selected cases from Africa, women shared stories on how they successfully challenged structural obstacles and ended up participating in peace processes. Recurrent themes in the seminar included the importance of ownership of UNSCR 1325, the imperative for knowledge development and transfer to the grassroots, the need for rethinking the operationalisation of the resolution, and the notion of solidarity and its implications for the implementation of UNSCR 1325. One of the outcomes of the High-level Seminar was the crafting of an Africa-wide strategy for women in peace and security, namely the Durban Statement on Women, Peace and Security, which is a lobbying tool that women can use towards strengthening the implementation of UNSCR 1325.

This report is based on reflections on the seminar, as well as desktop research on the thematic issues of women, peace and security. It highlights the pivotal role of UNSCR 1325 as a seminal instrument that will advance the cause of women. While acknowledging some progress towards the implementation of the resolution over the last 10 years, the report also presents gaps between the aspiration of the resolution and the reality on the ground. In particular, participants of the High-level Seminar concluded that participation, protection and financing are still lacking in the implementation of UNSCR 1325. They pointed to women’s continued marginalisation from formal peace processes, as well as increasing levels of insecurity and violence against women and girls in conflict zones such as Darfur and the eastern Democratic Republic of the Congo (DRC) as evidence of the gaps in implementing the resolution.

Overall, the report concludes that, despite the decisive role played by UNSCR 1325 in highlighting the issues of women in peace and security, the resolution has fallen short in terms of addressing systemic violence on women as well as structural discrimination. Ultimately, the need to stop perceiving UNSCR 1325 merely as a normative framework but to conceive it an instrument that has to be translated into actions with support from governments, civil society, grassroots women, donors and the international community was underscored. Governments can assist in moving UNSCR 1325 forward through enabling policies, the provision of education and raising awareness of the resolution, as well as the establishment of national action plans (NAPs). As such, the need for creative modalities of how to move forward in addressing these gaps while furthering the implementation of UNSCR 1325 cannot be overemphasised. This report affirms the value of UNSCR 1325 as a tool for galvanising the participation of women in peace processes, enhancing the protection of women and girls from sexual violence in conflict, and promoting the leadership role of women in the transformation of conflicts.

The following are emerging recommendations from the conference. These are targeted at national governments, regional organisations, the UN and civil society organisations (CSOs):