Setting the Stage for the UNGA’s High-Level Thematic Debate on UN, Peace and Security

On its 70th anniversary,… 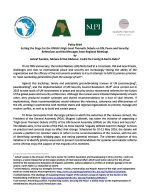 On its 70th anniversary, the United Nations (UN) finds itself at a crossroads. Old and new threats, challenges and risks to international peace and security are increasingly testing the ability of the organisation and the efficacy of the instruments available to it as it attempts to fulfil its primary promise: to “save succeeding generations from the scourge of war”.

Against this backdrop, timely and potentially groundbreaking reviews of UN peacekeeping, peacebuilding, and the implementation of UN Security Council Resolution 1325 were carried out in 2015 to take stock of UN involvement in peace and security and to recommend reforms for the future of the global peace and security architecture. Although the reviews were initiated independently of each other, they produced notable synergies and shared recommendations on a host of vital reforms. If implemented, these recommendations would enhance the relevance, coherence and effectiveness of the UN, working in partnership with member states and regional organisations to prevent, manage and resolve conflict, as well as to build and sustain peace.