From 6-7 June 2013, ACCORD Peacebuilding Unit hosted 18 participants from around Africa at the ACCORD Peacebuilding Handbook Review Workshop. The workshop brought together practitioners, policy makers and researchers in the field of peacebuilding, representative of government, civil society, academia and international agencies and partners. This workshop aimed to create a platform through which participants, trainers and trainees could share their ideas and comments on the Handbook, offering suggestions on how it can be improved and best used in peacebuilding processes.

The idea behind the workshop is to allow the Unit to received content analysis from key practitioners in the field and using this to revise the first edition thus allowing for the second edition of the ACCORD Peacebuilding Handbook to be as applicable and relevant to what is needed by trainers, practitioners and trainees in peacebuilding work. 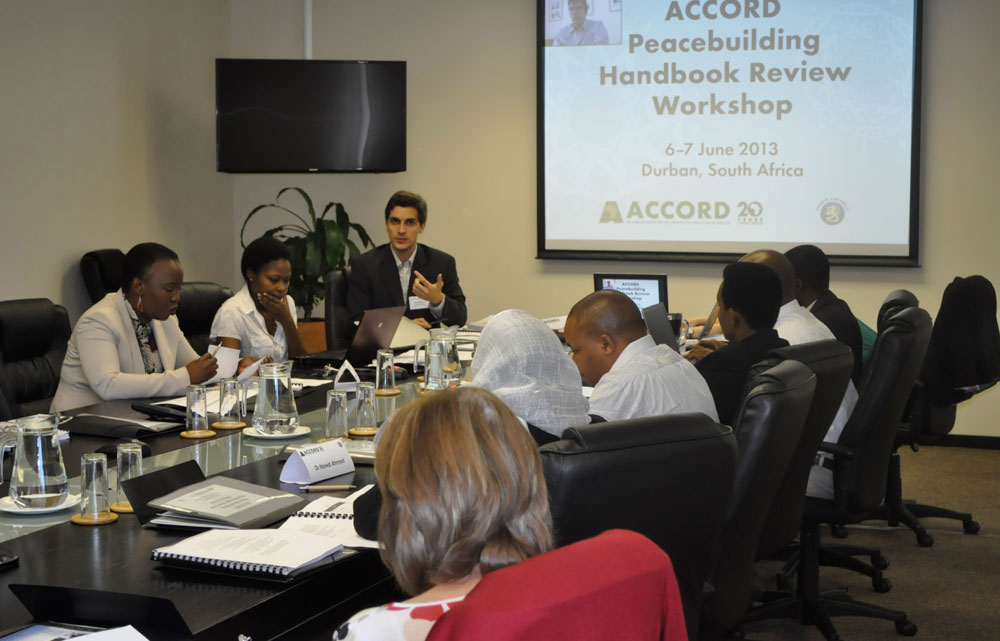 The Peacebuilding Unit published the first edition of the ACCORD Peacebuilding Handbook in April 2013. This first edition will not only be used as a self-study guide aimed at a wide range of both internal and external actors, but will also be utilised as a training tool by ACCORD in support of its peacebuilding processes. The Handbook is aimed at positively contributing to the possibilities for sustainable peace through encouragement of coordination and local ownership. To this end, the Handbook intends to assist international actors to improve their understanding of how international security and development interventions in general, and peacebuilding in particular, is perceived by internal actors; in this way, international actors can improve the way they communicate, relate to, and incorporate internal actors into peacebuilding processes, and internal actors can also more successfully identify opportunities for their own participation, contribution and collaboration.

During this workshop specialists in various fields of peacebuilding were asked to review and analyse chapters specific to their practice, providing valuable and informed suggestions and inputs for improvements. Over the two days, participants spent a large portion of time in small working groups interacting closely with the Handbook and reflecting on common trends in peacebuilding such as gender representation and local ownership issues. Suggestions, inputs and reflections were communicated in presentations which greatly exceeded expectations, and which culminated in vibrant discussions with regards to what is really needed from a Handbook by those in the field. Upon conclusion, the Peacebuilding Unit felt that the workshop had successfully achieved its aim and had provided the Unit with vital new insights relevant to the Handbook.

This event served as the first step in the review process of the first edition of the Handbook, and the feedback will thus be used to generate new content, as well as revise existing content- particularly with an eye to incorporating more practical tools, experiences and examples. The review process allows us to increase local ownership of the Handbook itself and include specific content relevant to what is needed on the ground, and thus the Peacebuilding Unit looks forward to further comments from participants in the workshop on the various chapters in the Handbook. The Handbook will be used at the Unit’s first African Peacebuilding Coordination Network (APCN) training in Liberia in late June 2013, from which more feedback and reflections on its use in the field will be received. All the reflections from this review process will enable to Unit to revise the first edition and release the Second Edition of the ACCORD Peacebuilding Handbook in October 2013.

Senior Researcher on Russia-Africa ties at the African Governance and Diplomacy Programme, SAIIA