Strengthening political governance for peace, security and stability in Africa

A research report based on the AU High-level Retreat held in Cairo, Egypt, from 4-5 September 2011, organised by the African Union Peace and Security Department in cooperation with the Government of Egypt, the African Centre for the Constructive Resolution of Disputes, the Centre for Humanitarian Dialogue and the Cairo Regional Centre for Training on Conflict Resolution and Peacekeeping in Africa.

From 4-5 September 2011, the African Union (AU) convened its second High-level Retreat on the Promotion of Peace, Security and Stability in Africa in Cairo, Egypt. The AU Retreat was convened in collaboration with the host country, Egypt; the African Centre for the Constructive Resolution of Disputes (ACCORD); the Centre for Humanitarian Dialogue (HD Centre) and the Cairo Regional Centre for Training on Conflict Resolution and Peacekeeping in Africa (CCCPA). The overall theme of the 2011 AU Retreat was ‘Strengthening political governance for peace, security and stability in Africa’, primarily as an opportunity to respond to governance-related challenges to the peace and security landscape in Africa.

The AU Retreat took place against the background of unprecedented developments and unrests in North Africa. It brought together approximately 150 participants, including senior officials and special envoys/representatives of the AU, regional economic communities (RECs)/regional mechanisms (RMs), the United Nations (UN), the European Union (EU), the League of Arab States, the International Organisation of La Francophonie, the Organisation of the Islamic Conference, research institutes and think tanks, and experienced private mediators. Through sharing experiences, challenges and possible solutions, the retreat aimed to strengthen African peacemaking efforts in relation to conflicts that emerge from governance-related issues.

Through both plenary and break-out sessions, the AU Retreat provided the opportunity to exchange perspectives on the following topics:

The imperative for good governance on the African continent cannot be overemphasised. This is due to the intricate connection between governance and other socio-economic issues including economic growth, development, security and democracy. In the African context, the governance of public office is prominent in discussions of good governance, hence the use of the United Nations Development Programme (UNDP) definition, which conceptualises governance as the “exercise of power or authority to manage a country’s resources and affairs. It comprises mechanisms, processes and institutions through which citizens and groups articulate their interests, exercise their rights and obligations, and mediate their differences” (UNDP, 1997). Good governance emphasises values such as participation, representation, accountability, transparency, responsiveness and respect for the rule of law.

Since its establishment, the AU has undertaken new commitments in the field of good governance, expanding on earlier pledges made by the Organisation of African Unity (OAU). The Constitutive Act (AU, 2002) confirmed the AU’s determination “to promote and protect human and peoples’ rights, consolidate democratic institutions and culture, and to ensure good governance and the rule of law”. In July 2002, the AU supplemented the Constitutive Act and the New Partnership for Africa’s Development (NEPAD) with a Declaration on Democracy, Political, Economic and Corporate Governance, which states that member states “believe in just, honest, transparent, accountable and participatory government and probity in public life” (NEPAD, 2002).

While every country faces the challenge of developing its national infrastructure and putting in place functioning governance mechanisms, the governance environment in Africa must be understood in terms of the pressing socio-economic conditions that characterise much of the continent. Despite the achievements that have been registered in a number of African countries, the majority of the countries classified by the UN as ‘least developed countries’ (LDCs) are found in Africa. This reality underscores the importance of improved governance to realise the needs of society, and contextualises the challenging context in which governance structures operate. It is against this backdrop that, in recent years, several efforts have been initiated to assess and measure the quality of governance of countries around the world – including those with a particular focus in Africa.

Measuring and comparing governance across different countries is a controversial and political exercise, which is by definition an extremely challenging undertaking. That said, governance measures such as the NEPAD and the African Peer Review Mechanism (APRM), the African Governance Report (AGR), the Ibrahim Index of African Governance, the African Governance Monitoring and Advocacy Project (AfriMAP) and the Human Development Index do still yield powerful comparative assessment tools capable of capturing the societal conditions that drive governance efforts. Developing statistical tools for comparisons between countries allows for the ability to monitor change, identify problems and contribute to priority setting and policy formulation – thereby revealing in a country an understanding of the governance environment that would otherwise be invisible.

In recent years, there have been a number of initiatives and interventions intended to enhance governance in Africa. A key initiative was the adoption of the African Charter on Democracy, Elections and Governance at the 8th Ordinary Session of the AU Assembly, held in Addis Ababa on 30 January 2007. This charter highlights the commitment by member states to the universal values and principles of democracy, good governance, human rights and the right to development. It is intended to provide member states with a reference point to measure reform and to improve governance processes.

Some of the prospects and opportunities for Africa’s governance that were discussed by stakeholders at the retreat included:

Challenges of governance in Africa that were discussed by stakeholders at the retreat included:

During the deliberations, participants stressed the need not only to strengthen existing frameworks of good governance, but also to call for the operationalisation of existing instruments. The conclusion of the AU Retreat witnessed a call to the AU to support ongoing transition processes in North Africa fully, to ensure that the quest for democracy and good governance is met. A key outcome of the AU Retreat was the Cairo Declaration (AU, 2011), which reiterated the need for renewed efforts by different actors and stakeholders in governance to address implementation gaps. In addition, the following recommendations emerged:

In addition to the above recommendations, participants called for the AU Peace and Security Council (PSC) to exercise its powers fully under Article 7(m) of the PSC Protocol. This stipulates that the PSC, in collaboration with the Chairperson of the Commission, shall “follow up, within the framework of its conflict prevention responsibilities, the progress towards the promotion of democratic practices, good governance, the rule of law, protection of human rights and fundamental freedoms, respect for the sanctity of human life by member states”. Greater involvement of the AU Panel of the Wise (PoW), the Pan-African Parliament (PAP) and the African Union Commission (AUC) on Human and People’s Rights were also encouraged towards the overall efforts to promote good governance. 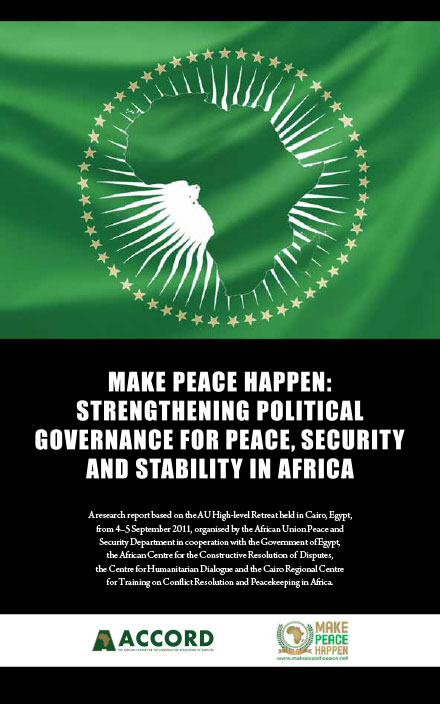