According to the United N… 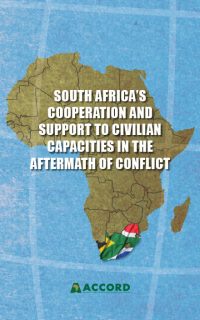 According to the United Nations (UN) Secretary-General’s 2011 report titled “Civilian capacity in the aftermath of conflict” (United Nations 2011a) it is clear that countries emerging from conflict are typically confronted with a wide range of urgent demands to build and sustain peace; yet they often also face a critical shortage of capacity to attend to priority needs quickly and effectively.

The international community is increasingly recognising this challenge, with the consequence that many bilateral and multilateral actors have taken steps to improve support to conflict-affected countries. Emerging countries, like South Africa, have shown interest in supporting the development of capacities in post-war societies – particularly through bilateral and multilateral engagements. South Africa’s engagement has largely been governed by its post-apartheid foreign policy. Most notably this relates to aspects of the African Renaissance and the African Agenda, both of which focus South Africa on increasing its presence within Africa, and increasing Africa’s presence at global level. These two policy positions have helped the country to concentrate on two central aspects; developing multilateral institutions and enhancing peace and security on the continent through the creation of a stronger ‘Global South’. South Africa has been a leading advocate of, and has significantly supported institutions such as the New Partnership for Africa’s Development (NEPAD) and multilateral development within the Group of 20 (G20) – both of which explicitly highlight the nexus between economic development, peace and prosperity. With regard to peace and security in Africa, South Africa has played a central role – providing peacekeeping support and personnel in countries like Burundi, Central African Republic (CAR) and the Democratic Republic of the Congo (DRC). South Africa also has a prominent role in the Southern African Development Community (SADC), African Union (AU) and the UN. For instance, during South Africa’s tenure on the UN Security Council (UNSC), the promotion of the African Agenda featured prominently. South Africa attempted to show that an African state can be a global power by highlighting the country’s role in and capacity to address matters of peace and security through policy development and reform and multilateral and diplomatic means.

Despite South Africa’s support for peace and security, and efforts to enhance civilian capacities in Africa, many of the country’s internal procedures, departments and processes necessary for the provision of adequate support remain largely undocumented. The UN, in fact, states that civilian capacities in the Global South are insufficiently documented and disseminated (United Nations 2011a). In response, the African Centre for the Constructive Resolution of Disputes (ACCORD) undertook to examine and analyse the mechanisms that direct and support South African civilian capacities. The focus of the review was on current approaches within South Africa which promote and develop the mechanisms that provide support to post-conflict states. The work of the government and civil society organisations (CSOs) was examined. Four important aspects of South Africa’s past, current and future development of civilian capacities in post-conflict countries were discovered. The first trend relates to South Africa’s history. The country has a wealth of experience gained from its own transition to democracy in the early 1990s. Secondly, there is a wide range of actors in South Africa who are engaged in post-conflict development work, yet there is often a gap in communication between these actors – leading to the duplication of work, incomplete context analyses and inadequate results. Thirdly, many of South Africa’s engagements in post-conflict settings have been short-term and limited in scope. Lastly, although civil society plays an important role, their efforts are rarely coordinated with those of the government. This gap in communication limits the impact of post-conflict development efforts.

This report concludes with a series of recommendations aimed at supporting and informing the advancement of South Africa’s civilian capacity mechanisms. Key recommendations are outlined below: