The Conflict Management Work of the Civil Affairs Division of UNMIS 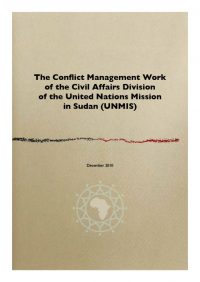 Since the establishment of the United Nations Mission in Sudan (UNMIS) in 2005, the Civil Affairs Division (CAD) has gained considerable field experience with local-level conflict management in the complex conflict environment in Southern Sudan and the Three Areas. In this context, CAD commissioned in 2010 an assessment of its conflict management experience, including developing recommendations for CAD’s future conflict management work, in a post-referendum mission.

The findings of this report are based on the experiences of CAD officers working in the field. Their co-location and constant engagement with communities and actors in government at all levels means that for many CAD officers their view of conflict management is often coloured by the perspective of their particular region or state, rather than the overall ‘big picture’ of the North or the South or all of Sudan. Thus the findings speak to the importance of local context, the establishment of relationships of trust, linking traditional and external approaches to conflict management and the importance of sustained engagement with communities.

The findings emphasize the importance of limiting the role of CAD’s conflict management work to supporting, facilitating and advising, i.e. stopping short of implementing instead of, or on behalf of, local actors. In this context, the importance of personalities and personal relationships in carrying out the conflict management work of CAD was stressed – the development of interpersonal relationships is essential for developing trust with counterparts, and trust is an essential pre-requisite for being open to advice and for accepting support.

The ‘success’ of any particular initiative is dependent on the dynamics of the conflict and the commitment of the parties involved to resolving the conflict. Many CAD officers interviewed were of the opinion that it would be difficult to identify ‘things that work’ if the assumption is that one can then replicate them elsewhere. The study found that most CAD officers in the field had the ability to understand why a certain approach was more successful than another in a particular context – thereby placing greater emphasis on the context specific process rather than any specific tool or mechanism.

The most recognisable, and contested, approach to conflict management encountered was the peace conference. While opinion is divided amongst CAD officers regarding the value of peace conferences, there seems to be a widely held view that many of these conferences do not live up to their potential. Peace conferences remain, however, the primary vehicle used for managing conflict. These conferences are often characterised by top-down imposed agreements – perhaps better understood as statements of intent from the parties – and they typically lack implementation or follow-up. It would seem as if the peace conference approach is often indicative of a once-off intervention, rather than a sustained engagement, and the study recommends that the CAD make a special effort to strengthen and widen the approaches of peace conferences, particularly with views that these conferences are part of a larger process in which parties, namely relevant communities, traditional and government entities, are able to sustainably engage with each other.

The ‘niche’ or ‘value-added’ role of CAD can be summarised as local-level presence – which implies access to government, traditional and community leaders; locally informed data-gathering and analysis; and the ability to link the Mission with other international actors active at the local level.

It was found that there was a close link between CAD’s conflict management and governance related work. CAD was able to have a constructive influence on mitigating and managing violent conflict, but resolving conflict requires long-term investments in building stronger government institutions.

CAD officers work in an extremely challenging environment. UNMIS, as with all Missions, is fraught with frustrations that often combine with the challenges of operating in such a complex environment. Participants of the study identified a number of often practical areas, that if improved would significantly enhance their ability to carry out conflict management work. The most significant, and in some cases crippling, challenge facing CAD is understaffing.

Perceive conflict management as an ongoing process. The study recommends that CAD support sustained process-type engagements, rather than once-off or ad hoc peace conference-type engagements. CAD can be key to facilitating processes that help their counterparts to make this transition, both by providing support, advice, knowledge, encouragement and by supporting community peacebuilding projects that help communities to do this for themselves.

Strengthen information gathering, analysis and dissemination. In order to have a stronger capacity to implement conflict management strategies, the continuing emphasis on building stronger systems for data-gathering and dissemination is essential.

Take steps to improve access to financial support. Address the frequent misunderstandings that many CAD officers have in terms of potential access to petty cash allowances. There is a need to resolve any procedural issues that require the processing of external applications and managing of funds; CAD officers need to be trained to access these external funds; and there is a need to invest CAD resources at Headquarters (HQ), regional and sub-offices to manage the flow of applications and reports between the field and HQ.

Involve the right people. Apart from the government and SPLA, CAD can improve existing ties and extend capacity-building with civil society actors.

Stay focused on field activities. CAD officers pointed to the importance of developing and maintaining contact with communities and local authorities – spending more time in the field extends and strengthens existing trust-based relationships.